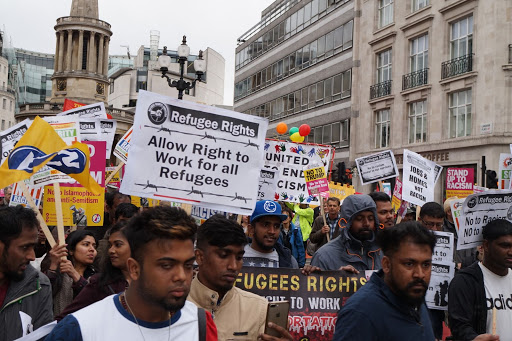 This paper examines spatial differences in the attitudes of the public towards asylum seekers using data from the British Social Attitudes Survey. Initial analysis reveals some statistically significant variations across geographical areas, with people living in London, the South East of England and Scotland displaying the most tolerant views. The spatial variations are then further investigated by considering differences between rural and different types of urban areas. The estimation of regression models enables a range of socio-demographic influences on attitudes to be examined including whether an individual is a foreign national, belongs to ethnic minority group and possesses a higher education qualification. Members of each of these groups are more concentrated in urban areas, especially London, thus accounting for part of the observed differentials. However, even after controlling for these and other factors, some significant differences remain between rural and some urban areas, especially large cities. We discuss potential explanations and conclude that having opportunities for meaningful social contact with asylum seekers and other immigrants is a key factor underlying some of the unexplained rural-urban differences in attitudes. Given increasing diversity in rural areas, it is recommended that policy makers and civil society organisations concerned about the impacts of negative attitudes on social and community cohesion should invest resources in creating opportunities for meaningful social contact between different groups.